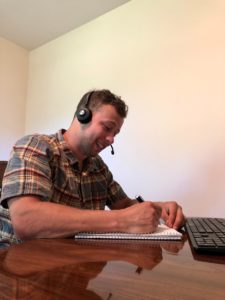 Midland Credit Management (MCM) account manager Jesse R. wants the consumers he talks to every day to know they have more in common than not.

He answers calls from consumers in difficult situations on a day-to-day basis. The common thread, he said, is that they’re all seeking answers.

“They’re calling in for a solution,” Jesse shared. “Sometimes they’re calling in frustrated and don’t know their options. If I can listen to what they’re saying, I can acknowledge and make sense in my mind why they’re saying those things and feeling those things. Then I can refocus those feelings on how to move forward. My favorite call is when I can show people, I’m a human being. There’s nothing special about me. I just want to connect with them.”

Jesse said he’s motivated to help people through his job because he can relate to the consumers he works with.

“I’ve been on the other end of those phone calls,” he said. “I didn’t come from a lot. I’m the oldest of six kids. I know what struggle is like to a degree. I haven’t walked a mile in these people’s shoes, but I know what it’s like to struggle. What motivates me is knowing where I come from and knowing anybody can improve their situation. I’m able to sleep better doing what I do because at the end of every call I know I’ve helped the person on the other end.”

The core of Jesse’s approach comes from a technique he learned when he first joined MCM three years ago: Actively listen to the consumer and ensure they know we’re here to listen and help them find a solution.

First, you want to listen,” he said. “If someone feels they can talk to you about what got them in that situation, it shows you’re willing to listen. Sometimes that’s all it takes.

You never know what somebody’s going through, so first it’s about listening and then relaying to them that we are willing to work with them; it goes a long way.”

“If you’re not treating people with respect like we do at MCM, you can’t get much done,” he added. “Not only that, but it’s not a good feeling on either side. It’s important with any business to have integrity, and there has to be morals behind that.”

MCM’s consumer-centric approach makes it easier for account managers like Jesse to build a relationship with consumers who often don’t know the options available to them.

In one case, Jesse was working with a consumer who had immigrated to the U.S. to build a new life for his family. He’d gotten behind on his account with a home improvement store that he used to build his business. He told Jesse of the stress of the debt hanging over him and how it was affecting his relationship with his wife and his ability to focus with his kids after a long day. The dread of a collection call was frequently on his mind. By getting to know him and understanding his situation, Jesse was able to offer the consumer a flexible payment plan, which the consumer hadn’t known was an option.

“A lot of people in that situation have never experienced it before,” Jesse said. “That’s why I try to be as informative as I can. Sometimes they might expect to have to pay the debt in full and might not know we can work with them on flexible payment arrangements. Sometimes they don’t know their debt is now interest-free and fee-free.”

Once consumers realize MCM is here to help them resolve their debt, not just to collect on it, the relationship dynamic often changes, Jesse said.

“Flexible arrangements help consumers because not everyone can afford to pay something off in a lump sum,” Jesse said. “I talked to someone recently who had run into difficult times and got behind. We had to stretch their arrangement, but for them that was the best option at that time. I told them to think of their payment plan as a blueprint. When you build a home, you have to start with a blueprint. Once you have a foundation, you build up from there. Resolving this debt could be opening a door to get on track with other things.”

January 24, 2023
Encore’s Global DEI Leader on Helping People Be Their Most Authentic Selves at Work

As an organization with more than 6,600 employees spanning nine countries and four continents, Encore Capital Group draws strength from…

December 20, 2022
Encore Connected Week: Giving Back By The Numbers

During our second annual Encore Connected Week in November, we took time to celebrate the Values that unite our company.…

Today, we released our 2021 Environmental, Social and Governance (ESG) Report, which brings to life Encore’s global efforts to advance…

November 17, 2022
Encore Connected Week: A Celebration of our Values

At Encore Capital Group, we live by our Values: we care; we find a better way; and we are inclusive…

One of Encore Capital Group’s core Values is to be inclusive and collaborative. That means embracing our differences and working…